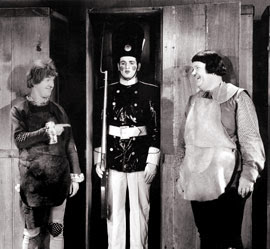 The DESERT CLASSIC FILM SOCIETY will be presenting MARCH OF THE WOODEN SOLDIERS on Friday, December 7 at 7 p.m. at the Bijou Cinema in Yucca Valley.

This is one of Laurel & Hardy’s best feature films and it has a Christmas theme. Stan Laurel supervised this production which looks very impressive on the big screen. A short Xmas cartoon will be shown before the feature. Mini-Lecture before the films will be presented by National Public Radio Film Critic Randy Fischer and film historian Christopher Perry.

The Bijou Cinema is located at 57482 Onaga Trail in Yucca Valley. Admission is $5 per person.

For information and to join the society go to the website www.meetup.com/DESERT-CLASSIC-FILM-SOCIETY Seating is limited. Reservations are recommended and can be made on the website. There is no charge to become a member . The DESERT CLASSIC FILM SOCIETY is a Non-Profit 501 (c) (3) Organization.